WHAT IMPACT DOES MALE SMOKING HAVE ON SPERM AND FERTILITY? 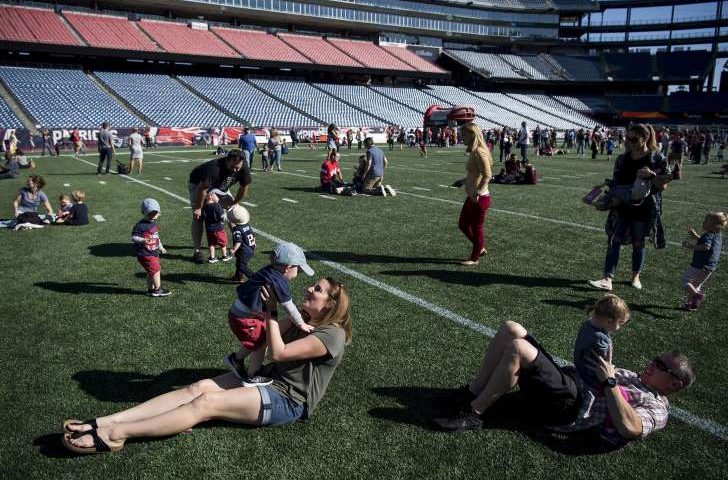 ‘I FELT GOD’S HAND WAS THERE’: MOTHERS REFLECT ON FAITH AND FERTILITY AT WORLD’S LARGEST GATHERING OF IVF BABIES

FOXBOROUGH, Mass. — They flooded into Gillette Stadium, thousands of moms, dads and children eating hamburgers and hot dogs, tossing balls, making goofy faces and otherwise having fun. No one would have guessed the huge obstacles they had overcome to be here.

The families were all patients of Boston IVF, one of the nation’s largest fertility practices. They were celebrating the clinic’s 30th anniversary and the estimated 90,000 babies it had helped usher into this world.

The event last October is believed to be the largest gathering of IVF children and their parents in history. The Post photographed some of the children and spoke with their mothers, particularly about the role God and spirituality played in the journey. Some said faith kept them going through years, even decades, of fertility treatments. Several nearly died because of complications but nonetheless pursued their desire for a family. And virtually all viewed successful pregnancy — by whatever means — as evidence that their children were meant to be.

HERE ARE SOME OF THEIR STORIES.

After her miscarriage, Jennifer Casella had angry days when she demanded to know why her body didn’t “work the right way.” While driving, in the silence of her car, she would ask God: “Why make me a woman when I can’t conceive?”

On other, more optimistic days, Casella told God she would accept His plan whatever it might be. On “some days,” she recalled, “it was just pure pleading.”

“The biggest thing was I gave it all to Him,” Casella said. “I didn’t think and try to analyze my situation or figure out how I’m going to fix it. I left it to Him to fix it.”

After praying, Casella said she often felt lighter, and that lightness carried her through the IVF process. Her first cycle was successful, and on Feb. 21, 2014, she gave birth to twins.

Tamra Lambert’s husband suffered from cystic fibrosis, leaving the couple unable to conceive naturally. So they froze his sperm and began saving up for IVF.

Years passed. But as the couple approached their goal, Lambert began worrying about her church community. What would they think if she used IVF instead of having a child “the natural way that was intended by the Bible?”

During services one Sunday, another woman shared her struggles with infertility. Lambert quickly invited her out for coffee. The woman assured Lambert that “God created” assisted reproduction.

“The science is there for us to use, as well. It’s not ungodly just to use it,” Lambert recalled the woman saying.

In that moment, Lambert said she felt able to move forward; it was not “bad” to turn to IVF to start a family.

Though online forums reverberated with discussions about IVF and religion, Kalie Lunt “didn’t really want to go there.” Nothing, after all, was likely to deter her and her husband from what they viewed as their best option for having a child.

After years of trying unsuccessfully to become pregnant, Erica Connolly sought help at age 28. Money was a problem.

Connolly, who worked in human resources, and her husband, a medical technician, couldn’t afford IVF, which often costs tens of thousands of dollars.

Their insurance didn’t cover it. It seemed things could hardly get worse when Connolly was suddenly laid off.

Connolly and her husband, who is Catholic, sought comfort in prayer and books that encouraged them to have “faith throughout the journey.” Soon, Connolly found a new job. One of the benefits: IVF coverage.

The pregnancy, she said, “seemed like an answered prayer. I felt God’s hand was there.”

For her, she said, “This is the way it was supposed to work out. We feel complete.”

“To me, I think religion and science go hand in hand. I don’t think they’re in opposition to each other,” McNeil said. “I feel that there is God that created the universe and everything like that, and I feel that everybody has that right to be happy.”

Kendra Buletti’s first child, a girl named Elinor, was born through IVF in 2016. A subsequent cycle produced another pregnancy, this time a boy she named Colton.

The boy, it turned out, had Down syndrome. Buletti’s family urged her to abort, but Buletti resisted. “This was such a precious pregnancy,” she said.

At 23 weeks, Colton’s heart stopped beating. Buletti was told she could either deliver him naturally or have a procedure called dilation and evacuation, in which a doctor would empty her womb. The procedure is also used in abortions. When Buletti looked it up online, she saw a few photos and looked away.

But Elinor’s delivery had been fraught with complications, and Buletti feared for her health. She chose dilation and evacuation.

Buletti was nearly 44, the age at which her insurance would no longer cover another IVF attempt. Emotionally raw from Colton’s death, she began seeing a therapist and decided to try again even though she did not feel ready. That attempt failed in December 2017 leaving Buletti still struggling with her decision not to deliver Colton.

“Growing up Catholic, you do anything but what Mother Nature deems normal, they look at you as a sinner. And I had to be like ‘No. I did what’s right for me and my health because I still had a daughter to worry about.’ ”

A year later, Buletti still keeps one of Colton’s first ultrasounds on her desk.

“Moms are strong in general, but anyone who goes through this process is a warrior,” she said. “It’s not an easy process.”